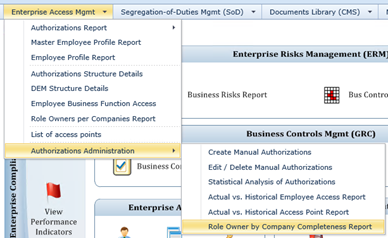 The report will show which Role / Company combinations (present in the Authorizations) do not have an Owner assigned. Note, that a Global Role Owner can be assigned (no company specified). These Roles will not show in the report, since it is assumed that the Global Role Owner is assigned.

Columns percentage completed (% completed) and percentage available (% available) are added to the report My Periodical Auth. Reviews: As Reviewer (report id 43). The column-

·         EZ-Compliance: Ability to add Owners for In Progress PARs

In the EZ-Compliance Client application, it is now possible to Edit/Add Owners of a PAR (Cycle), which is in Progress and/or Pending. In case Owners are added to the PAR, they will receive an email notification that they have been added.

Since the Account/Name are mandatory fields, when doing an import and the Account and/or Name in the Import file is empty, the log will show for which line number of the import file the Account name has no value.

The Event Log of the Employee Batch Expiration is enhanced so it is easier to read and include more information.

Resolved issue for the report SoD "Conflicts Report - Used / Not Used" (Report id 124). The report did show access points which are used as unused.

Resolved issue with the Open-ERP Import function. In the case that the Open-ERP import file has more than 75k lines, the file was not being imported if the import file extension is in Uppercase.

Resolved issue when downloading the PAR Report to excel.